This week me and the family have been in Lofsdalen, at my in-laws cabin. It has been quite good weather during this week but some rainy nights so it has been a really great ending of my vacation period.

I spent two days in the downhill tracks since they have had a Bike weekend event here with clinics and round tours of all tracks. I have a lot of Go Pro videos of my sessions recorded, so I will cut it and give you a sneak of the result later. I can say that the jumps and speed feels bigger and more intense than they appear on video. I had really high expectations but got a bit disappointed by the ”result”. Well i’ll share it further on.

During Saturday I entered a Mtb race called ”LofssjÃ¶n Runt”, its a race around the lake of LofssjÃ¶n. I signed up for the tougher race, a 50 km long trip around the lake on hard gravel road and some forest parts/tracks. During the last 10 kilometers we raced up the mountain, HovÃ¤rken and then down one of the easy downhill tracks.

I have been a bit sick during this week, sore throat and a bit fever in the beginning of the week. This have of course affected me so my body did not respond to well during the race. To top it off, it started raining like hell during the race. I felt like downgrading from the tough race to the exercise race instead (only 42km), but i changed my attitude and forced myself to do the tough race anyway.

I led a crowd of people almost the whole way around the lake and got many ”thank you” for a great drag during the 42km long trip before i went uphill and they went to the finish line. during the climb uphill i had strong legs but the body didn’t feel ok so i took it a bit easy and saved myself. There was a lot of rain and the stones and tracks were slippery up on the mountain so i could not run as fast as i would have liked.

Last year I entered the 42km race and finished at a time of 1 hour and 59 minutes. This year i raced further, but if i had not done the same trip i would have raced almost 30 minutes faster at that distance. It should have taken around 1 hour and 31 minutes this year.

This year i finished at a time of 2 hours and 26 minutes, i aimed at a max of 2 hours and 15 minutes so i’m a bit disappointed but I made it although my body wasn’t 100% ok. The weather also made it worse and during better conditions i would have made my goal of 2 hours and 10 minutes.

Now i will head home and start the preparations for Cykelvasan that start in one week. Nervous and excited! 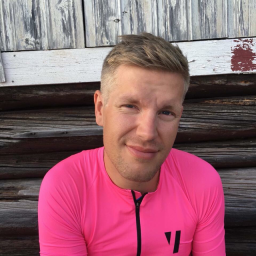